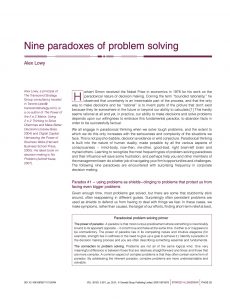 “Herbert Simon received the Nobel Prize in economics in 1978 for his work on the paradoxical nature of decision making. Coining the term ‘bounded rationality’, he observed that uncertainty is an inextricable part of the process, and that the only way to make decisions and be ‘rational’ is to invent parts of the picture that don’t exist because they lie somewhere in the future or beyond our ability to calculate…”

“Great leaders pay attention to both the short-term and the long-term, sales and development.”

Alex Lowy has made several consulting trips to Malaysia in recent years, both teaching and meeting with business leaders and clients. On his most recent visit he conducted a project for Job Hunt Training called “Critical Thinking & Strategic Problem-Solving Skills For Leaders.” This interview is reprinted below.

 Who are the CEOs that you admire and why?
John Chambers of Cisco Systems has been an exemplary high-tech leader. He provides a vision that doesn’t waver, and he resists the pressure to over-celebrate victories and over-worry in rougher periods. The company is dedicated to excellence through knowledge and execution. Top talent is recruited and tends to stick around. Cisco is a leader in acquiring other companies, and makes a point of quickly and effectively integrating the new companies and their employees without losing their unique value.
At a smaller, local and not-for-profit level, a woman named Judy Hills has impressed me. I met her a decade ago when I joined The Canadian Psychiatric Research Foundation, a volunteer Board whose primary purpose was to raise funds to support psychiatric research. Working with a small budget and staff, Judy was able to mount numerous events, raise the required funds, attract and retain a high profile, blue ribbon Board, publish a series of mental health booklets for industry and the schools, and establish credibility and important links in the psychiatric research community. She inspired volunteers to help achieve all of this, maintained a strong sense of vision that gave the enterprise coherence, and was always humble.
Steve Jobs said in his biography that was published posthumously that one of the reasons why great companies eventually fail is because they place too much importance on the salesmen and elevate them to decision-making positions while ignoring the engineers, designers etc who work with the products. He said the salesmen focus on increasing sales for short-term benefits while giving less importance to the development of superior products and in most cases they know nothing about the products. In the end it is the lesser quality of the products and their inability to be innovative etc that finally heralds the downfall of the companies. How true or false is this you think?
There is some truth to this, but I believe it is almost always more complicated. The saying, “Success has many parents…while failure is an orphan” has much truth. Lou Gerstner famously brought IBM back from the brink in the early ‘90s after being CEO at RJR Nabisco and at a major division of American Express. He lacked the technical knowledge that was common for chief executives in the computer industry, yet was able to achieve a recovery that his industry peers could not match. He held the company together, strengthened core offerings and increased sales. Great leaders pay attention to both the short-term and the long-term, sales and development.
What has life taught you?
That is a big question! Top of the list of life lessons for me are appreciation, focus and learning. On Appreciation: life is such a gift, and it is a pity to waste energy on lamenting what you are missing rather than celebrating the things you have the good fortune to enjoy. This is one of those lessons that becomes clearer as one gets older, and I am old enough now to realise its importance. Approaching experiences with an attitude of appreciativeness makes every day meaningful. On Focus: there is only so much any of us can accomplish, even those with relatively large resources and talent. By focusing on the important things, and by developing a limited set of capabilities and interests, we can achieve more and realise our potential more fully. On Learning: the benefits of learning so outweigh the effort and the costs, and there is an endless succession of things I want or need to learn. Not only is there practical value in learning, but it feels good. I am a better person when I am open to learning.
    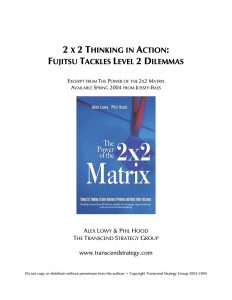 “For the past few years we have been developing a dilemmas-based approach to strategic problem solving which we call 2 x 2 Thinking. The method recognizes that dilemmas are inherent in business and uses creative tension as fuel to drive innovative solutions and break the logjams that impede strategic decision-making…”

from the book, Contingent Workforce Strategies Sourcebook: A Guide for Program Managers 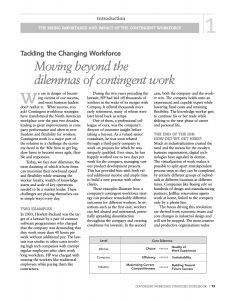 “We are in danger of becoming victims of our success, and most business leaders don’t realize it. What success, you ask? Contingent workforce strategies have transformed the North American workplace over the past two decades, leading to great improvements in company performance and often to new freedom and flexibility for workers. Contingent work is a major part of the solution to a challenge the economy faced in the ‘80s: how to get big, slow firms to become more agile, flexible and responsive. Today, we face new….” 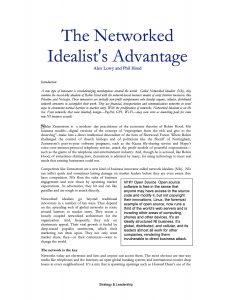 “A new type of innovator is revolutionizing marketplaces around the world. Called Networked Idealists (NIs), they combine the rascal-like idealism of Robin Hood with the network-based business models of early Internet businesses like Priceline and Netscape…”