Skip to content
Consultant, author, and speaker Mimi Donaldson is an expert in training, education, and supervisory management, among many other things. She honed her skills as a Director of Educational Media and an internal trainer at Rockwell teaching presentation skills to supervisors and managers. Since 1984 she has helmed her own company, consulting clients and speaking. When one client had a problem with relations between customers and front-line staff she was called in to define the issues and then train employees. And, it is there, that she came across this map of people’s attitudes about time and things, which I’ve turned into a perceptual map, called Formal-Versus-Casual. She developed the idea behind it in an effort to teach managers and front-line personnel to show more empathy toward employees and customers, respectively. After I heard her discuss this experience in a public speaking engagement last year I knew I’d eventually write about it.
Formal Versus Casual
Her insight was that there were people who are formal about time, and those who are formal about things. And, conversely, there are people who are casual about time, and those who are casual about things. Donaldson says “Formal=Time people get to the meeting early. They always want to arrive early. Casual-Time people, on the other hand, dash in just as the speaker is beginning, at which point, really formal people may become passive-aggressive. and let out a rushed sigh sound. You know that sound? [Strong, slow exhalation of breath]. At that point a casual-time person my respond “What’s your problem?”)
In person, Donaldson’s stories about formal versus casual people are funny. But her point is that these were not merely choices. People rarely change. They may mature and become flexible in their behavior. They may have a backup style. But they are who they are. The Formal-Time manager carries a grudge against an employee who is late for meetings; but the Casual-Time employee wonders “What’s the big deal?” 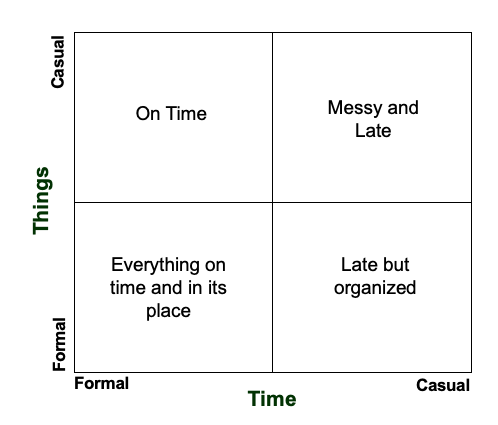 Some people mix the two: Formal-About-Time, Informal-About-Things. They get to the airport on time usually, but always lose their keys. “This” says Donaldson, “is my style.” Others have a place for everything from the library card to sunglasses to parking stubs. Always the same place. They hate wasting time looking for things the same way the Casual-About-Time person hates waiting three hours in an airport. The Formal-About-Things person actually gets physically ill when the Casual-About-Things person is looking for his or her keys because it means they’ll be late, too.
Donaldson discovered that many conflicts between managers and employees and employees and customers could be ameliorated with some rules that helped imbue any situation with empathy. She taught front-line employees to say…
“I understand how frustrated you are. Especially on Christmas Eve (or insert other reason). Here’s the situation: The electric company is here and working on  it right now and the lights will be on within an hour.” Nine times out of ten, Donaldson explains, the customer will then say “Thank you.”
In effect her rule was: First, Empathize, and second, let them know you heard their complaint. Third, then say “Here’s the situation:” Not “But,” and never “However” because the brain hears those as “No.” Instead, saying “Here’s the situation” engages the left brain to hear important facts. “And, if you can, explain to them how the problem ultimately will be solved,” she adds.  “Even if ‘Here’s the situation’ means there is no budget for what the customer wants, at least he knows know that people share his feelings and they are hearing him.
Empathy Matrix
Much like a personality test, the four quadrants define a personal approach to the world.
Upper Left–Casual/Formal: The always-late person who has the details memorized but is overbooked at work.
Lower Left–Formal/Formal: Highly organized, but somewhat rigid in approach.
Lower Right–Formal/Casual: A flexible person who tries to be timely but is challenged in paying attention to details.
Upper Right–Casual/Casual: Late AND messy. This person sometimes is a subject matter expert, a procrastinating creative.