The Republicans face a dilemma and it’s a big one. During the 2012 election, Obama won over Hispanic voters by better than a 70-30 margin. Though Democrats always win the majority of Hispanic voters in national elections, this was quite a comedown for Republicans from the 44 percent of Hispanics who voted for Bush in the 2004 election. After the election, consensus quickly built among party insiders and strategists that without a plan to appeal to this growing demographic, Republicans would find the White House out of reach.

“We could have won this election if the party had a better brand name with Hispanics,” said Al Cardenas, chairman of the American Conservative Union, speaking to Nicolas Riccardi of the Associated Press. “I don’t believe there’s a path to the White House in the future that doesn’t include 38 percent-40 percent Hispanic support.”

Ideas have consequences, and this meme-that the White House would soon be beyond reach-quickly found its way into Republican orthodoxy. Immediately, the party began promoting its young immigrant and non-white stars, and Republican members of Congress turned nearly 180 degrees on the immigration issue. Senator Marco Rubio of Florida proposed a comprehensive immigration bill that accomplishes much of what Democrats have sought for a decade, and he did it without much pushback from the party. It’s astonishing really, since in the spring of 2012, most of the primary candidates for the Republican nomination tried to outdo each other in how tough they could be on restricting a path to immigration, particularly for undocumented Hispanics. Rick Perry’s campaign really came apart after he told the other candidates “they didn’t have a heart” on issues related to undocumented Mexican immigrants! 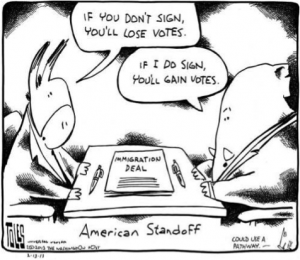 Heads They Win, Tails We Lose
But coming around to reality on immigration doesn’t solve the party’s electoral woes. It’s just the start of a long and overdue rebuilding process. As a recent cartoon by the Washington Post’s Tom Toles illustrates, Republican’s lose either way in the immigration debate. [Ed. The cartoon shows a donkey and an elephant discussing an immigration bil. The donkey says “If you don’t sign, you’ll lose votes.” And, the elephant responds “If I do sign, you’ll gain votes.” ] If Republicans don’t sign a bill they lose Hispanic votes in the next election. If they do agree to allow more immigrants into the US and naturalize some of those who have resided here illegally, they may still lose because newer immigrants tend to vote Democratic.

Given all of this, what is the right strategy for the Republican party – hang in with traditional positions and values? Soften on this set of issues to “buy” Hispanic votes? Promise changes in return for support (i.e., sell the future to win the present)? The correct answer of course is none of the above. US democracy depends on there being two party options available. By available we mean able to win and capable of governing. This takes issue-leadership and broad appeal. Both parties need to be able to represent the needs of the vast majority of the country’s citizens. Rehabilitating credibility and capacity is needed – it’s overdue. This is substantial, long-term work, not a set of cosmetic touch-ups packaged and positioned by marketers. The right strategy for the party is one that respects and leverages core Republican values while simultaneously re-establishing itself as modern and open to today’s young people and immigrants. That won’t be done overnight.

The Installed Base Problem
One concept we can borrow to examine the Republican dilemma comes from the world of technology: the installed base. An installed base is the set of individuals who have adopted your product. Many products exhibit “network effects” i.e, the product becomes more valuable as more people use it. Political parties exhibit a form of this that market researchers call “social effects”: adoption by others updates or validates your self-image or opinion, and increases your social utility. In short, as a political party becomes stronger—has a larger installed base—a positive feedback loop is created. It becomes easier to pass legislation and more voters may want to identify with that party. But in technology there is a down side to having a huge installed base – with growth comes resistance to change, as long-time users become accustomed to the status quo and reject efforts to improve or update features, creating an opening for competitors.

A highly inflexible installed base hampers a political party’s ability to make timely policy changes. Before long, strength becomes weakness, and the same things that lock in a loyal core, lock out a growing majority of voters. Republicans have a strong, installed base who historically have been opposed to social changes from women’s liberation to liberalized immigration policies to gay marriage. But, like Microsoft in the ’90s when the company had to satisfy both legacy DOS users and those who wanted a faster modernization of Windows, Republicans need to hold onto current voters while reaching out to new ones. They are already taking the first tentative steps down that road, recognizing that there is no inherent conflict between Republican tenets and openness to the latest generation of immigrants. But any significant influx of new Hispanic voters will probably help Democrats in the short term. 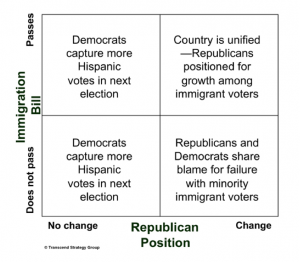 The strategic necessity to change the party’s position on immigration becomes clear when you plot the relationship between possible legislative outcomes against changes in the historic Republican position (see diagram). If the Republicans take a hard-line position against immigration reform, they are handing elections for the foreseeable future to the Democrats, with very little prospect for gains, regardless of what happens with new immigration legislation. Ironically, the impact on the party’s fortunes appear worse if they succeed in scuttling legislation, which now appears unlikely (lower left). Only if they make the position change now can they set themselves up to gain a larger share of immigrant votes in future elections and contribute to a sense of national unity on this key issue.