Silicon Valley.com‘s sharp-witted columnist, John Murrell deserves the credit for seizing on the “two-faced” word play in his characterization this week of Facebook’s dilemma concerning whether to allow (or not) groups that deny the Holocaust to post and set up communities on their social networking site. As he and others like Lisa Respers writing in CNN.com suggest, there’s no win here for Facebook. Remove the Holocaust Deniers from the site, and you’re imposing your morals on open, free expression (what do you suppress next?); allow them to post, and you appear to be condoning or endorsing despicable hate initiatives, contributing to new recruits being drawn to the movement, possibly inciting hate-related crimes, and certainly offending people. The harder you look at the issue, the murkier it gets, with layers of repercussions emerging for taking either of the positions: remove them, and you’re on a slippery slope, opening yourself to demands to treat other ‘questionable’ postings; don’t remove them, and risk uncomplimentary comparisons to cases where you did censor, as in recently deleted photos posted by breast-feeding mothers, or ‘lactivists’.

Responding on behalf of Facebook, Barry Schnitt explains, “Just being offensive or objectionable doesn’t get it taken off Facebook. We want it [the site] to be a place where people can discuss all kinds of ideas, including controversial ones.”

Attorney Brian Cuban, brother of Dallas Maverick’s owner, Mark Cuban, sees it quite differently, and has written an open letter to Facebook CEO Mark Zuckerberg urging the groups’ removal from the site. “Allowing these groups to flourish on Facebook under the guise of “open discussion” does nothing more than spread their message of hate.”

How then do you deal with this, as Facebook must, knowing full well that this will not be the last time such a controversy is going to arise. Do you settle it arbitrarily and establish your own standards and criteria (ala Cuban, who points out that there is no First Amendment right to free speech in the private realm)? Do you open the debate to the community, or invite experts to comment and advise? Or, do you treat every instance as a unique case and deal with them one at a time on their merits?

Viewing this as a dilemma, what are the two core dueling values that are in conflict? Getting this right in our experience is crucial, bringing either clarity and greater consensus, or adding confusion and distortion that takes you further away from being able to deal effectively with the issue. The core dilemma could be cast as any of the following:
– morally correct versus legally permissible (as experienced in early labour and anti-discrimination organizing efforts)
– Fair and just versus expedient (what will it take to make the issue go away?)
– freedom of expression versus offensiveness to others (a basic tension in an open, civil society)

We could get creative and generate more possible dilemmas, but the third one, freedom of expression versus offensiveness/hurtful to others, strikes us as a fair and accurate way to describe what’s happening and what is making it difficult to resolve. 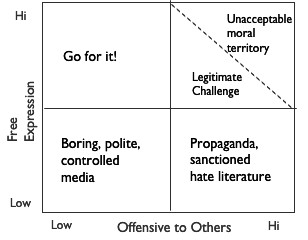 With high freedom and low offensiveness (upper left), we have the ideal situation – go for it!
When freedom is low and offensiveness is also low, you can be sure there is a flatness and some form of repression happening, be it imposed by some external force like an institution or state, or by oneself.
High offensiveness and low freedom fits coercive situations like propaganda.
Where both freedom and offensiveness are high, it can go either way – morally unacceptable (as in forms of hate or violence), or legitimate opinion or self-expression that others just happen to find offensive.

The Holocaust Deniers on Facebook seem to fall into this last quadrant. Now the question is which of the two categories fits them best? We concur with the prevailing view that this is indeed a dilemma that cannot be settled one way, once and for all. Facebook’s position on the issue needs to be circumstantial and measured. Hopefully, they will make the correct call in this instance, reserving the right to be reflective and considered in resolving future dilemmas. Yes, they need to be prepared to take a stand in accordance with their values and principles, and they need to have the courage and retain the flexibility to alter their decision should new facts or consequences contradict their original position.