Draw a cloud on a whiteboard. Now draw four boxes inside the cloud and label them “Facebook,” “Apple,” “Google,” and “Amazon.” Increasingly this is the picture of the world. The internet cloud is still there, but all the action takes place inside the walled gardens that control access to our communications, our documents, our apps, our friends, and our commercial transactions. Put another way, for these four companies, the old internet cloud doesn’t work. Too much of the content is free, customers interact while shielding their identity from those who supply them with information and applications, and there are not enough social rules to create a safe-enough environment for commerce. 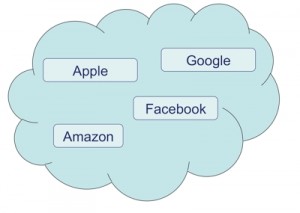 The Big Four, and some others, are strategically focused on Walled Gardens, Internets-within-the Internet. Each Walled Garden comes with its own proprietary advertising, media, commerce, and individual rights. Of the four (which we’ll cover in later posts), Apple is the one most on its game. And, the most feared. You can tell a company is at the pinnacle of its power when it is accused of extracting monopoly rents. People then start calling you “the evil empire,” the successor to IBM and Microsoft in their respective heydays. And, like those firms, Apple follows an archetypal strategic pattern, one that it didn’t exactly invent, but has perfected as well as anyone before.

In an earlier post we discussed how Apple’s iPod, more than any product including the original Macintosh, put the company on a new strategy arc. The iPod was the company’s first successful product extension. And, it also created the need for iTunes software, which simplified digital music playback and drew in the hordes of Windows users who wanted iPod functionality for themselves. This was the company’s first successful market extension into the Windows customer base. Finally, these two innovations paved the way for a diversification via the iTunes store. The store put Apple in the content and cloud businesses, areas which have since become the company’s main focus. 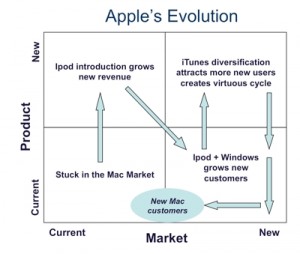 Ansoff’s Product/Market Matrix, now around for nearly 50 years, is still useful for thinking about this issue. Apple perfected this computer industry model in which a product extension gains new revenue and leads to market extensions. Once internet services and software are added (diversification), the virtuous cycle is complete.

The current strategy is a higher octave, an echo, of what has come before. The iPad is a wild success with current users (product extension) and is starting to draw in new users (market extension). As new content and features flow into the app store (diversification), customer satisfaction and Apple profits grow. The cloud, which increasingly represents all types of information, apps, music, and movies, is now the key focus of Apple’s strategy. And, they’re letting the great things they’ve learned in selling apps to trickle back to computer platforms as well, improving customer experience. 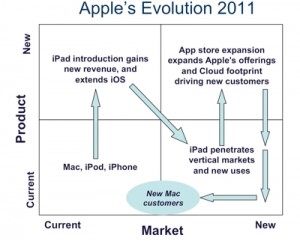 Many have predicted that by now Apple’s dominance in musicplayers, smartphones, and pads, should be cracking. The strategy, they insist, must break down, and to prove their point, they point to the case of the Wintel duopoloy of the ‘90s, which nearly destroyed Apple. But this is faulty reasoning. “Open” platforms—those in which anyone is free to develop and run software—don’t always triumph over closed systems. In fact, precisely because of its proprietary hardware, Apple was the only company capable of this strategy. We’ll explore questions about that in our next post.